skip to main | skip to sidebar

Thanks to Su Pang and Miss Vanilla, curators and photographer (Su) and musician (MV) respectively, for including me in a one-night, all-woman show last weekend in Dumbo at Rabbithole Studios. I was in the company of some talented women — Fina Yeung, Emily Strange, Sharela Bonfield, Katherine Kisa, Elaine Hargrove, Stephanie Calvert, Anne Spurgeon, Lia Zuvilivia, Rose DeSiano

In my years participating in group shows in New York, this was one of the best, most satisfying and surprising. Su, who lives across the country, picked our work from online images, and wasn't sure what she was getting into. Neither were we! The level of craftsmanship and fusion between content (which varied greatly from artist to artist) and craft in each woman's work exceeded any expectations I might have had. I was in awe when I stepped into the gallery to hang my work. I had found a group of peer artists, with little effort on my part except for answering Su's emails, showing up with a hammer and some nails.

Below are a couple of installation shots of my work. For more images taken by Su Pang from the exhibit and performances, visit Facebook. 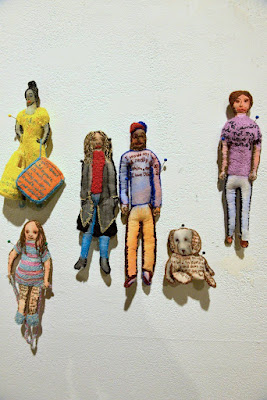 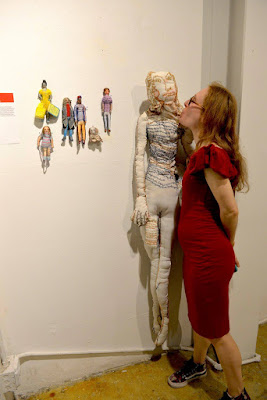 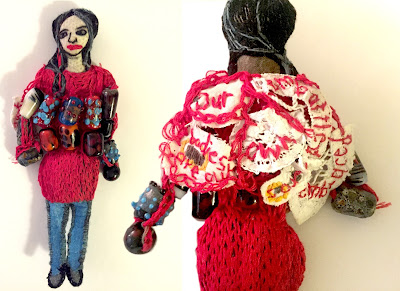 Thoughts of women’s (reproductive) health book, “Our Bodies, Ourselves” and Barbara Krueger’s, “Your body is a battleground.”

Text on back of figure (cape) says, “Our bodies are our own. Not embattled, embraced.”

Perhaps contradictory are the beads strapped to her chest, which remind me of armor and also weaponry, as if she is about to battle.

In a recent conversation with a friend, I described a 20 minute conversation I have with myself when getting dressed to run or go to work, to go out to meet friends: Is this hemline too short and will it attract too much (unwanted) attention? How many times will I want to tell a guy to put his eyes away or quit commenting? Is this outfit appropriate for school (being with students)? What message does it send? Will I feel comfortable in this? Will I feel safe?
Posted by Unknown at 12:33 PM 2 comments:

Through the kindness of two Brooklyn curators, Katherine Gressel and Kim Maier of the Old Stone House, my work will be included in a show opening this Wednesday evening, "Partners, Parents, Pets: Contemporary Portraiture."

The curators were most interested in my 2011 Brooklyn Arts Council sponsored Brooklyn Love Exchange project. Most of that work was sold, and we're showing a few remaining pieces. I decided to revisit old content—love stories people had emailed me, and I'd liked but was too overwhelmed to embroider. I ended up making two of those and an email collaging memories of an old love with a new, brief love interest. The piece below includes 30 years of memories. 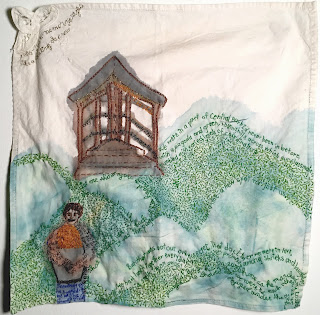 Remembering the past can be wistful and also torturous. I am glad this piece is over. I finished it in time for the exhibit and can move on emotionally from some difficult memories.

If you happen to be in the New York area, please join us this Wednesday, 2/10, 6-9pm at the Old Stone House in Park Slope, Brooklyn at 336 3rd Street.

Breaking the Glass Ceiling, new sculptures in the works

Happy New Year and my work as a social contract

For the past three years, I've struggled with how to make work that moves beyond sharing my own and others' personal stories into the realm of culturally-relevant commentary. It is possible that my own thinking and self-contextualization were the only barriers to this. What if I were to think of my work as a social contract, and myself as having a duty or responsibility to represent multiple voices as a way of speaking about contemporary social issues without being didactic or obnoxious?

A new version of my artist statement is underway. I am thinking of making it the home page of my web site. Good idea or ridiculous?!
Posted by Unknown at 10:03 AM 4 comments:

When I was a kid, I overheard the term "glass ceiling" pretty often, meaning an invisible barrier to women and/or people of color seeking advancement into high level corporate positions. While I never dreamed of making it in the corporate world, I kept an image in my head of an actual clear glass ceiling, and how it would feel to accidentally bang into it.

As an artist, some of the gallerists and administrators who favor my work have suggested that I'd sell more and show in more galleries if I were a man. While I recognize that these comments are meant to be supportive, I am not 100% convinced that being female has hampered me. I know a far greater number of disappointed male artists than female artists, for instance.

So, what is a glass ceiling in 2015? I am not sure exactly how I would define it. I think the glass ceiling of my 80s childhood has shifted and changed shape. I unfortunately do think that misogyny still permeates our culture in sometimes obvious and other times subtle ways. For instance, I've noticed Facebook posts describing how women silently tolerate subtle forms of abuse — inappropriate sexual remarks or jokes, unwanted physical contact — in social and/or professional settings where speaking up seems unfavorable. I am disappointed to see women close to me in age feel as though they cannot voice disagreement with behavior that belittles or maligns. While experiencing unwanted remarks or physical contact is not a glass ceiling, the psychology of grinning and passively participating in unwanted behavior encourages women's all-over passivity. Instead of self advocating, we laugh off something offensive, hurtful or inappropriate when we should be demonstrating a lack of approval and advocating for ourselves. If we won't stick up for ourselves in the context of casual banter, how will we ask for a raise or a more flexible schedule? How will we advocate for better parental leave and other benefits? How will we shift antiquated ways of thinking and behaving?

In a series of sculptures and characters now in formation, I am playing with the intersection of fiber and glass. Both of materials can be seen as delicate (and by extension feminine) while also being surprisingly resilient and strong. In the below piece, which says "breaking the glass ceiling," the figure's arms are glass beads. I've since taking this photo somewhat changed the structure of the piece, and am adding a jacket with more text about breaking my own glass ceiling. Stay tuned for more photos. 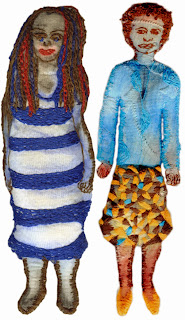 Join me at Workshop Gallery Artists Foundation at Brooklyn Workshop Gallery for the 2015 finale to Native/Immigrant City, my exploration of New York natives, immigrants and transplants from other parts of the country through soft sculpture. Since December 2014, I've been collecting stories and memories of moving to and from NYC, surviving rent hikes, questionable roommates and landlords, and falling in love with the City despite all the stress and vowing never to leave.

I translate friends' and strangers' stories into stop motion animations and embroideries on fabric paintings and sculptures. I try to give voice and tactile form to varying cultural points of view. With a Brooklyn Arts Council grant, I've had the opportunity to host some communal storytelling and embroidery events in the past year. Thanks to 61 Local and Brooklyn Workshop Gallery for donating space.

Join us on Thursday, 11/5 from 7-9pm for a poetry reading featuring KC Trommer and friends.

For additional hours and dates, contact me to set up a private viewing of the work, or look for updates via Facebook.
Posted by Unknown at 1:39 AM No comments: